Good afternoon, well as many of you know this would have been my son Charlie's 11th birthday today. My sisters and I with Meghan released balloons yesterday at the end of the highland games, and after they were released the formed themselves into the shape of letter C, I really wish I had taken a photo of this but through many tears and utter astonishment I missed the moment. I don't have a belief in any kind off religion but I do believe that there is something after death, not sure what but I think there is something.
﻿Its been 18 months since he died and in someways it still feels unreal to us that hes no longer here with us.
Ive got a couple of photos of him that I love and a little poem that was written for him by a member of staff who worked for Robin House, one of Scotlands childrens hospices, where he was a regular visitor and where he always got away with murder!! 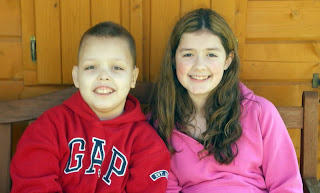 This was taken just before we moved house in 2009. Alex was meant to be in the photo to but he escaped! 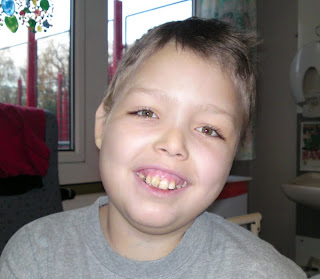 This is the last photo taken of Charlie. It was taken in November 2009 and I didnt know this existed. His teacher in hospital had taken it and it was handed to me a few months after his death, and I am so grateful for it, it means the world to me and its just how I want to remember him.
Charlie
Charlie was the kind of boy, who touched everybody's heart,
His cheeky grin and character clear from the very start.
On his first day at Robin House he was settled in by Morag,
From that day it was obvious that he could be a toe-rag.
Charlie always made sure, that his days were very busy,
Whoever looking after him, their head was in a tizzy.
He loved his action figures and Argos catalogue,
Being outside despite the weather, with Susan and her dog.
There was one thing in particular that Charlie liked to do,
Making up his own creations, a very special brew.
None of us were brave enough, to have a little taste,
Cos what had started off as liquid had quickly turned to paste.
The Chassy bus a favourite to places near and far,
Whatever destination, Charlie was the star.
Always watching and listening and learning things anew,
Soaking up information is what Charlie liked to do.
Charlie wasn't just a learner, as he taught us such a lot,
He meant so much to all of us and never will be forgot.
Happy birthday sweetheart xxxxx

awwww kat they are lovely photo's he does look such a happy little lad thats so often the way with children when they are sick isnt it they just get on with it and accept things at face value .The balloons gave me a shiver i must admit what a completely perfect moment for you im with you in that i believe there is something after life, he was saying hey mum im ok im sure . Take care sweetie
big hugs sara x x x

Hi Kat, very sorry to read of your loss, and a big Happy Birthday to Charlie, the balloons are a wonderful idea and no matter how hard it is he will always be looking down at you and saying Mum it's okay, I will always love you. We deal with things all differently and I love how you have remembered Charlie, Thinking of you and your family in these beautiful memories, love and hugz Denise xxxxx

That poem is so touching! Beautiful photos too!

Promote Your Page Too